This is a very local cake sold in Singapore. They are known as tutu cakes or kueh tutu. 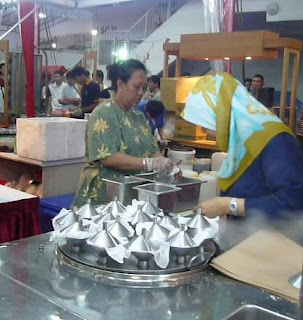 Posted by alicesg at 9:00 PM No comments:

I love to take video of these food vendors at work. :)

Posted by alicesg at 2:19 PM No comments:

At the food fair, it is so very interesting to see the different stalls selling different food. The stall that is inside is selling japanese cuttlefish ball and the stall nearer to me is selling the cabbage omelette.

Posted by alicesg at 9:00 AM No comments:

Yusheng meaning "raw fish" is a Chinese New Year dish, served traditionally on the seventh day of Chinese New Year or Ren Ri ("Everyman's Birthday"). It is a salad dish made of thin slices of raw fish and various spices, mixed with tossing actions by diners.

In Chinese legends, nuwa is the goddess who created the world. She created the animals on different days, and human beings on the seventh day after the creation of the world. For more information on the origins you can read from wikipedia. 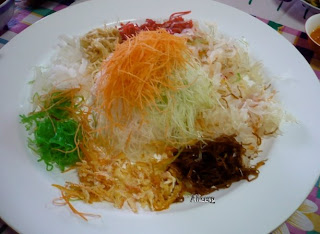 Arranged on a large serving plate, the colourful array of ingredients include raw fish, shredded green and white radish drained of liquid, shredded carrots adding a bright orange tinge to the dish, pickled ginger, crushed nuts and pomelo. The ingredients are topped with various condiments including deep-fried flour crisps, crushed peanuts, sesame seeds, cinnamon, pepper and other spices. All at the table would then jointly toss the salad with a generous portion of plum sauce and cooking oil to add sweetness and taste. 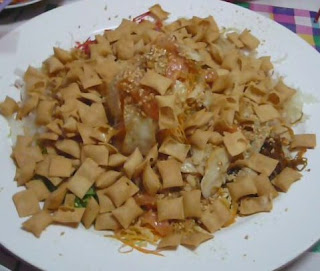 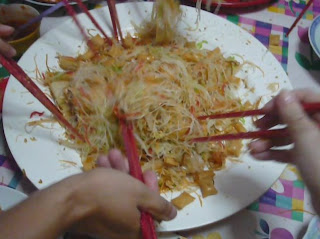 Now we toss the yusheng as high as possible for luck and as we toss, we need to chant "Lo Hei" which is cantonese toss for luck.

For more information on yusheng, you can view source from Infopedia.
Posted by alicesg at 8:46 AM 1 comment:

PLEASE ASK PERMISSION BEFORE YOU RE POST MY PHOTOS ON TO YOUR BLOG. THERE ARE SOME BLOGGERS WHO DID NOT ASK MY PERMISSION AND REPOST MY PHOTOS WITHOUT THE COURTESY OF LINKING BACK TO MY BLOG. THIS IS LIKE STEALING. PEOPLE, I HAVE SPEND MUCH TIME TAKING PHOTOS AND DOING HOMEWORK ON MY TRAVELLING INFORMATION AND KINDLY SHARE THESE INFORMATION TO ANYONE INTERESTED IN THEM. IF NECESSARY I WILL POST SCREEN SHOT OF YOUR BLOG TO SHOW YOUR BAD MANNERS OF STEALING MY PHOTOS. THE MOST DISGUSTING THING THEY DID WAS TO SCREEN SHOT MY PHOTO AND CORP OFF MY BLOG TITLE FROM MY PHOTO AND REPOST THEM IN THEIR BLOG.

Not writting for any establishments. Just to share my food experience in different places and also to share some recipes. :)

Please do not use or reproduce any of the photos in here without my permission. Thank you.

My other blogs update

alicesg
Two clumsy senior citizens who loves travelling (preferably on a DIY mode) and as long as our leg power can take us to where we wanted to go. We may be old and clumsy but very young at heart hahaha. We knows how to navigate our way around and read maps and simply loves taking public transports just like the locals in the countries we visited. As we travelled, we made fond memories together and hopes to continue travelling as long as our health permits.